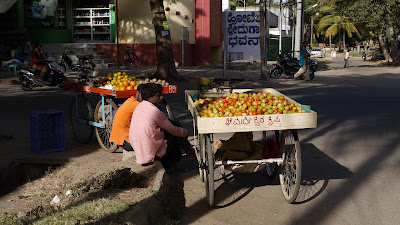 Uh oh..It’s very strange, but somehow, I am not feeling inspired, here in India.

Steven and I had a talk a few months back about artistic inspiration and for me it comes from a few sources. One of them for me is travel

The excitement of new experiences and adventures uplifts my being into a space where I suddenly begin to create. This trip may be too familiar for me. I mean, I love it, don’t get me wrong. I love India and it’s people, but somehow, maybe I’m not having my normal emotional pull because, once again, I find myself in a familiar place, with familiar people, having familiar experiences.

I have been sitting in my room tonight thinking. Man, I just haven’t been blogging and usually being in India inspires me with so much material I don’t even know what to do with it.

Tomorrow, I know I shall have material. I am going on a long pilgrimage type walk with my girlfriend. We hope to walk from Gokulam, where we live in Mysore all the way up to Chamundi Hill, many miles away. It is going to be epic. And I am going to try to take photos of funny and unique things you only see in India.

So, wish us luck! I shall be back to let you know if we made it and how it went and hopefully full of stories and photos too.

Yesterday, I went to Bangalore to see the Dalai Lama and it was so amazing and wonderful to be in his presence and hear what he had to say for a couple of hours (from row 11 nonetheless)
Posted by karazi design at 9:02 AM 3 comments:


Posted by karazi design at 6:32 AM No comments:

Email ThisBlogThis!Share to TwitterShare to FacebookShare to Pinterest
Labels: locations 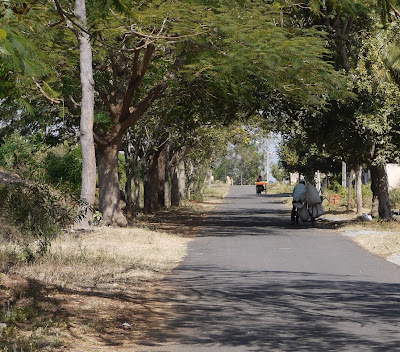 I sat with Kumar, my goldsmith teacher, tonight and we talked a bit about how the price of vegetables has quadrupled in the last year. I asked him how people are getting by and he told me, many people are not getting by.

It echoes what is going on around the rest of the world, but here it seems so much more raw... the reality is in your face, all the time. The struggle of the people here is huge. I'm talking about people who make maybe $3-5 a day working hard 12 hour days. How are they supposed to even buy food when the cost has gone up so much. Kumar told me the price of 1kg of onions was 10rupees (about $0.25) last year. Now it is 50rupees per kg that is over $1 just for onions. Imagine making $3 a day and trying to feed your family. So, difficult.

Anyway, that is what I thought about, a lot... And how very fortunate I am...
Posted by karazi design at 7:23 AM 2 comments:

3 young men were riding very very fast on their motorcycle (yes 3) and whack, one of them hit me in the ass and it hurt so bad. I just kept walking, what else was I going to do? Luckily, I was not hurt badly, just a sore butt and a bit shocked. A friend of mine just happened to be on a motorbike right behind them and he saw what happened and stopped and very kindly gave me a ride to where I was going.

I'm not writing this to make anyone look bad or to freak anyone out or turn them off to India. I'm writing it because, it is a good story. It's also a sad story. I feel so bad for these young men. Why would they want to do this? Why do they think this is ok? Unfortunately, these sorts of things are not uncommon in India. I told myself the first time I came, I was not going to let these sorts of things turn me off from this amazing place and I have not. I have dealt with it differently depending on the circumstances. In this case they were going too fast and I was too shocked to even react.

I'm still in love with India, just feeling a little sore today.. or should I say sour?
Posted by karazi design at 8:15 PM 3 comments:

a little slice of magic.

It's a magical place. India. Even after years and years and even after looking around and seeing strange things and thinking they are normal and even after all the difficulties it entails to get here and be here and even after all the emotional energy exuded and the abundance of creativity I feel while here. Still the magic persists, it pervades me. I LOVE IT HERE! Even during the illnesses and the frustrating moments and anything else that may come up.

Yesterday was spent relaxing and chatting with old and new friends at the river. A tranquil and gorgeous place. A beautiful countryside home full of art and artists. Although, as a rule, I typically don't swim in rivers in India, I did yesterday and it was fun to manipulate the current, climb out and sit on the warm rocks and sit in the swirling jacuzzi like pools. aaaahh...

The evening brought me to Kumar's shop. We sat, he, his wife, his son and I and talked about life and jewelry and gifts from America. We discussed the new pieces we will be making and we drew pictures and estimated gold weight. We designed and talked. It's one of my very favorite things to do in this world.. Sit with Kumar and 'make' jewelry... Oh, I am blessed...

May you all have shanti (peace) in your hearts.. one of my favorite Kumar quotes.
Posted by karazi design at 8:42 PM No comments:

Looking for a room. ‘You know sanjay, the rickshaw driver? He is finding people rooms.’ While sitting at the cocounut stand, I called Sanjay, who just happened to be sitting in his rickshaw, kitty corner from the coconut stand.

I arrived in Mysore early early this morning after a very long journey. I’m now staying at an old hotel in the city, but decided my first day’s mission is to find a flat to rent. I’m exhausted at the moment. It’s 1:10 pm and I haven’t slept in days, and am a bit dehydrated, but am totally determined to find a flat in the next two days. You see, not only do I study goldsmithing here, I also study yoga. Mysore is a sort of yoga mecca and students from all over the world come here to study. January and February is the busy time and it can be difficult to find a place, but it’s always worked in the past, so I know it will work again.

Sanjay came over to the coconut stand and got to work, calling this person and that person. I hopped in his rickshaw and first looked at a dingy little room… um no thank you.. then he asked ‘Madam, what would you like?”

I said, ‘One bedroom in a small house with a small kitchen and internet if available.’

We then tried a couple more places, but none were going to work.

At that point I realized, I had just been asked my first ‘only in India’ question. A little smile appeared on my face and I no longer cared if I found a room today.

I wrote this post a few days ago and have since found a lovely little room with nice light..
Posted by karazi design at 7:20 PM No comments:

I'm watching the sunrise outside the airport in Phoenix, the sky is an incredible mix of orange and purple.

It's time to switch gears. 4 days of having fun with my in-laws in Phoenix, biking, walking, skydiving (i didn't do it this time, but have in the past), golfing, eating and enjoying..

Now, I am on my way to India. It's my 9th time. After that many times, I know exactly what to expect...the unexpected...

This journey will bring new perspectives, it will open my eyes to so many things and I am hoping to transfer some of what I see into photos and some of what I experience into words, here on this blog. So, keep checking in.

Until then, wish me luck.. 3 long flights, one long taxi ride, fast forward 2 days and voila.. I will be there!

Oh mother India.. I can't wait to meet with you again!
Posted by karazi design at 6:04 AM No comments: 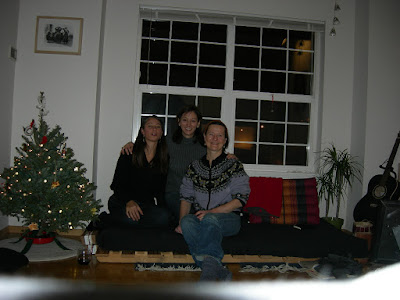 We wrote this song in honor and memory of our dear friend and teacher Catherine Tisseront. One week ago, she lost her long battle with cancer. The photo is from Christmas Eve 2008.

We love you Catherine! 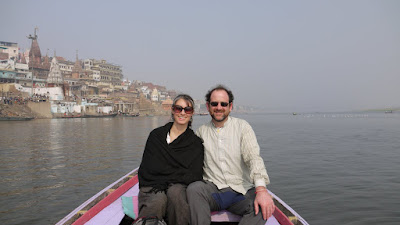 2010 started off in India, celebrating New Year's Eve in the ancient and amazing city of Varanasi on the Ganges River. The photo is of us getting a ride down the sacred river. 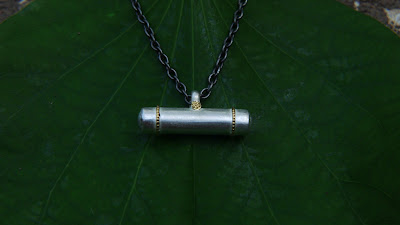 2010 was also the year of the elis. The beautiful pendant/amulet to help reduce fear in our lives. I made several of them with my jewelry teachers in India and they continue to be the popular piece of jewelry for 2010. So, in honor of my upcoming trip to India, they are on sale until Jan. 10 in my etsy shop here 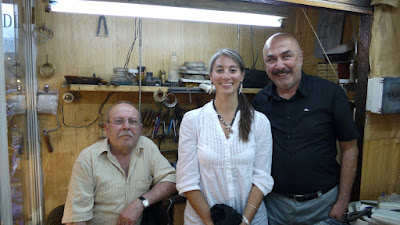 April and May took us to Turkey, where we traveled from south to north. And I met and learned from two incredible goldsmiths in the Grand Bazaar, Istanbul. From my experience with them, came the Byzantine Collection some of which is available in my online store here as well as atticus' online store here, KOBO in Seattle and soon (in the spring) on the Windstar Cruise from Athens to Istanbul! 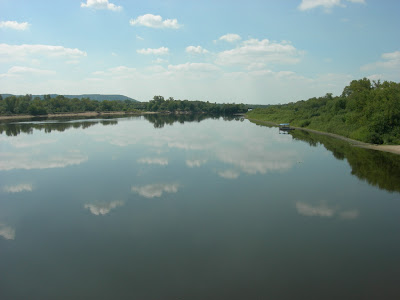 The summer I journeyed back to my homeland.. Wisconsin.. for a beautiful and fun visit with my family and a trunk show at Ancient Healing in Sauk City! 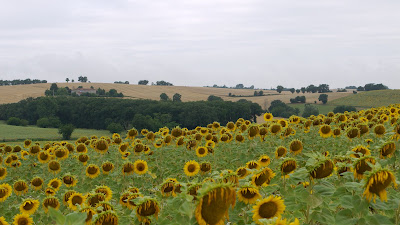 Later that summer we flew to Spain and took the train to S. France where we spent the month helping to shoot a movie. A new endeavor for both of us, but super fun and exciting none-the-less. 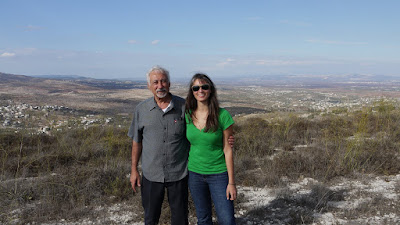 October I flew to the Middle east to spend 3 weeks with my Dad in Israel and Palestine. Here we had many wonderful experiences, but it also became the place that inspired me for the new collection of jewelry I hope to make in India this year. In jerusalem, I found ancient coins.. soon to made into jewels... 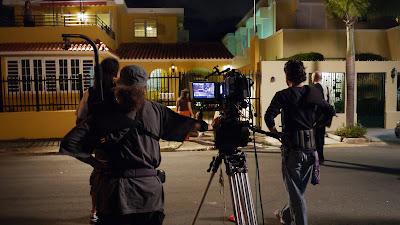 Then, in November, we flew to Puerto Rico to shoot more of the movie.. A great place to be over Thanksgiving. 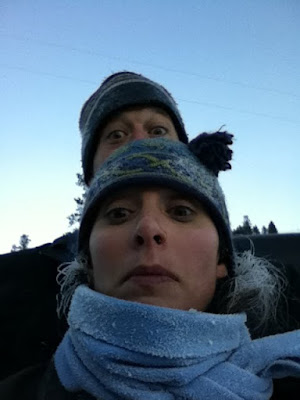 We ended the year in the beautiful Methow Valley, Washington, cross country skiing our hearts out with our friends. the photo is of our icy hair after a long and beautiful ski.