Woke up this morning in a humid haze of jet lag and new digs… with words of snow storms and school closings in Seattle.

We arrived on the red eye, yesterday. And were immediately whisked away to lunch and then a 4 hour production meeting. A productive meeting, going through the script, the shot list, the casting, etc…

Today, we went to the locations, to see where we will be shooting the first day, an apartment, the market. And then on to fittings!

Pretty exciting way to spend my 35th brirthday.
Posted by karazi design at 2:44 PM No comments:

It's been a week and a half since I returned to the US and my gears have definitely shifted... Although, I have more stories to tell about my journey to Israel and Palestine, they will have to wait for a while.

The last week was full of jewelry making, I finished a large order for a cruise company, and sold my jewels at a private jewelry party... (if you are ever interested in hosting one, please contact me, they are fun).

And now, I am posting, after a very long time, new gold rings on Etsy... Yay!!

They are beautiful and available for sale here.

I have less than one week before we head to Puerto Rico to continue filming the movie we started shooting in France (check the blog archives from July and August 2010) over the summer.. I can't wait! and don't worry I will keep you updated on all the excitement.
Posted by karazi design at 10:50 AM No comments:

We walked out of the Israeli checkpoint and into Palestine, the waiting taxi drivers asked if we needed a ride. “No,” we said, “we are waiting for someone”.

I hadn’t seen Nasser in years, but knew him from living in Madison, as a restaurateur, a Phd student and a voice of Peace for the Middle East.

Years later, we meet again, at the Jalame checkpoint. And this time he takes us on a true adventure through his homeland, the Jenin region of the West Bank, in Palestine.

We drove along a road over 2000 years old, made by the Romans and walked by Jesus. The area is surrounded by olive trees just as old. The landscape is hilly, dry, and dotted with earthiness of olive trees.

Still working on Peace, this time through connecting the people to their land, their neighbors and the world. In the last 5 years , Nasser has built Canaan Fair Trade, a successful fair trade oil olive company, empowering, employing and giving hope to over 1700 Palestinian olive farmers.

His excitement permeated, as he showed us around his newly built (just finished this year) factory. A Beautiful building amongst the olive groves. He now has 40 employees and a top notch facility with the hopes of producing somewhere between 400,000 and 500,000 liters of olive oil for export this year, amongst other products, like sun dried tomatoes and almonds. 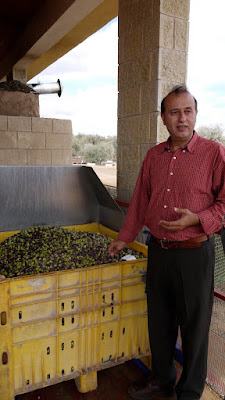 It’s harvest season in the region and everyone is busy in the groves, picking olives by hand. Whacking the branches with a stick, the fruit falls onto a large sheet down below. They gather the olives from the sheet and take them to the factory to sell. 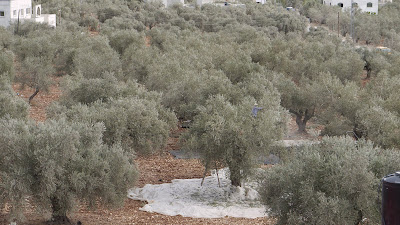 There are so many obstacles the Palestinian farmers face, including illegal land confiscation, limited access to water (due to the occupation by Israel), illegal settlements being built on their land and thus Palestinians being denied access to their own land.

Canaan Fair Trade has created a market for selling oil and now the farmers have a place to sell their olives, they can support their families and feel independent from the struggles they endure being under occupation. Canaan Fair Trade has also given the opportunity for the farmers to feel connected to the rest of the world, knowing their oil is being eaten by people across 11 countries.

We left the factory, but not before we ate fresh out of the press, olive oil mmmmmmmm with fresh bread mmmmmm…. 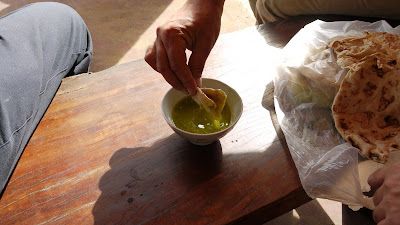 Nasser wanted to show us one of his favorite spots, high up on Liqa’a Mountain, where you can see Tel Aviv, Haifa, Nazareth, many small villages, and Israeli Settlements disrupting the flow in between. We took his four wheel drive truck up a dirt and stone mountain road, hopped out and looked at the countryside. Simply beautiful! 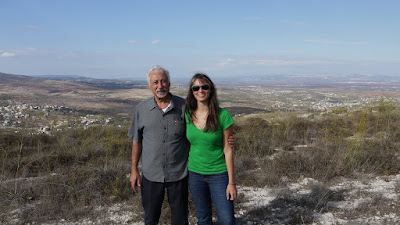 As we came down the other side, there were 3 women sitting in the shade taking a break from harvesting their olives, drinking tea. They invited us to join them. So, we did, drinking black tea steeped with wild sage and a bit of sugar. Quite refreshing.

We continued down the mountain and into Jenin for lunch in the market. And ended our day together at the farmers co-op, meeting farmers and some of the women who have their own thing going… making couscous, by hand, which soon will be in ALL the Williams and Sonoma stores.

For more on Canaan Fair Trade, click here, And there is a lot more going on, Eco-Tours, Palestinian home stays, olive harvest festival. Soon they are going to launch green track Palestine… converting falafel oil into fuel for the tractors being used by the farmers, and more… It’s so exciting!

From Jenin, we went to Zababdeh to visit Abuna Firas. Zababdeh is a small community of 4000. There is little hope here, no industry, nothing for the children to do, a very high unemployment rate. Abuna Firas is a Greek Melkite priest who is trying to help his community by creating jobs and empowering people.. A few years ago, he raised money and gave several sewing machines to women, who now are making clothing and are able to make a meager living as well as empower themselves by supporting their families. He has dreams of building a recreation center to give the children a place to play and gather, rather than roam in the streets. He just built a pre-school. He is doing good work amongst big struggles. Giving the people of his community hope! 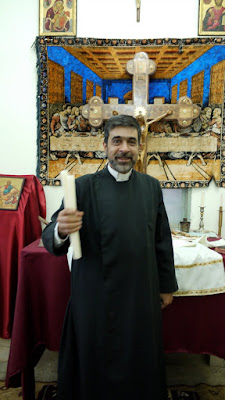 click here to see a little more of what he is doing.

We ended our amazing day on the West Bank with a sense of peace, community and hope for the people who live here amongst great struggle.

Then it was back to the Jalame Checkpoint to go back into Israel.. That’s a story for another day.
Posted by karazi design at 2:50 PM No comments: