shanti in your heart... 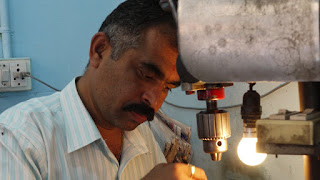 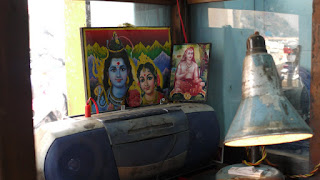 what a week. time flies here in mysore.. I decided after a week of being here, I could not be here and not practice yoga at the KPJAYI. So, I went in to pay my respects to Sharath and Saraswati, gave them a small offering of flowers and asked Sharath, if I could practice. He of course said, "you ask Saraswati." They have all sorts of rules about signing up in advance and filling out forms etc.. so, I knew that's what he would say, and i am happy, practicing with Saraswati is not much different than practicing with sharath. it's in the same room at the same time and with all the same people.. it's great.. and it really really feels so good to be practicing, once again, in that magical room.

Jewelry has been coming along. Last night, I went to Kumar's new shop, we sat and discussed and I saw some of our work. I am so excited, we are going to have small Ganesha pendants, Shiva pendants, and Lakshmi pendants along with more elis' and some golden rings... all beautiful!! I'll have photos soon.

As I was sitting with Kumar the other day, we were talking about the future of goldsmithing in India. He had not planned on being a goldsmith, he wanted to become a elementary school teacher, but because of certain circumstances in his life, he became a goldsmith, just like his father, and his father's father... I asked him why he was not teaching his son goldsmithing and he said, "Samia, you see, yes I am working and making money, but we must get shanti(peace) to our hearts." I love this statement. And it's actually not the first time I have heard someone in India say this. And as you probably are guessing, I fully believe it. Kumar believes that being a goldsmith is not really the path to shanti in his heart. It was not his dream.. but he does it with complete and total dedication and commitment to his family. He wants 'something better' for his children.

I wish we could all find shanti in our hearts. This, I believe would make the world a much happier place to be.. and this is one of the zillion reasons, I love India!!!
Posted by karazi design at 10:07 PM